EDITORIAL: Reflecting one year after the Las Vegas tragedy

Are we fighting, or are we just forgetting? 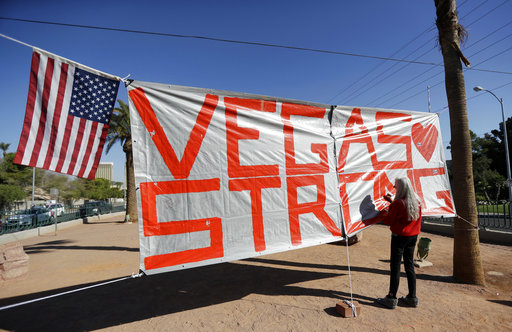 FILE - In this Oct. 5, 2017, file photo, Las Vegas resident Nancy Cooley signs a Vegas Strong banner honoring the victims of a mass shooting in Las Vegas. The official slogan of Las Vegas, "What happens here, stays here," is back by popular demand. The destination's tourism agency revived the 15-year-old slogan this week, three months after it was put on hold following the October mass shooting. Stephen Paddock opened fire from the hotel on an outdoor country music concert, killing 58 and injuring hundreds. (AP Photo/Gregory Bull, File)

TOWAMENCIN- 365 days ago, we all woke up to the news of yet another mass murder in America. That time, it was at a country musical festival on the Las Vegas strip.

Almost every day since then, we have woken up to a mass shooting.

You may not know or read about the almost daily shootings, but the reporting is certainly there. Now, granted, most of these mass shootings are not reported by mainstream media sources, but some don’t even become top stories locally. This is because America has become numb to massacres.

Every American should be frightened by the fact that hundreds of mass shootings are going virtually unnoticed.

I would use that phrase “Enough is enough,” but I am not going to, because clearly it doesn’t mean anything. We’ve been hearing it since 26 preschoolers were murdered. Since 26 churchgoers were killed. 50 nightclub attenders.  And one year ago, 58 killed and over 850 injured caused that hackneyed phrase to be relayed once more, and yet again, gun reform still eludes us.

As a society, we will take a day or two to look back at the shooting, remember the victims, and hear the much too familiar sound of a cable news gun control debate, but again, before we all know it, it will disappear from the headlines, and we’ll go on living our daily lives until the next massacre.

Approximately one year ago, on October 7, 2017, former Knight Crier staff writer Noah Clemens asked, “Can Las Vegas be the last straw?” Obviously, it wasn’t. As I mentioned before, there have been 330+ mass shootings since October 1, 2017, resulting in hundreds of deaths and countless injuries. Now, in a perfect (or even somewhat decent) society, these atrocities would spark immediate change in gun laws, but this is America, so obviously that won’t be happening anytime soon.

We do see some lawmakers who attempt to create gun reform, such as Senator Feinstein, who tried to get bump stocks banned after Vegas. This bill did not pass; it sort of fizzled away in the weeks after the massacre. The environment in Congress was an accurate representation of America. It was talked about for a few days after the event took place, but then everyone moved on.

If genuinely boggles my mind how we as a country are able to just move on after the worst mass murder in the history of our country. If nothing happened then, can any of us honestly feel that there is any true hope for change to ever come to fruition?

Now that we have under 40 days till the midterm elections, please remember these statistics and find out how your local and state representatives vote when it comes to gun violence.

Every reader should get involved in this fight or any issue you are passionate about. We are the next generation of America and we need to make our voices heard! We have seen with the Parkland students just how much we can achieve in such a short amount of time. So call your senator, congressperson, or even a local official, and get them to vote for gun control laws. In conclusion, we are living in a monumental and historical era. When our posterity looks back on us, what side of history do you want to be on?

To conclude my reflection, I urge every reader to join me in remembering the victims lost in the worst mass shooting in American history.