EDITORIAL: The allegory of life 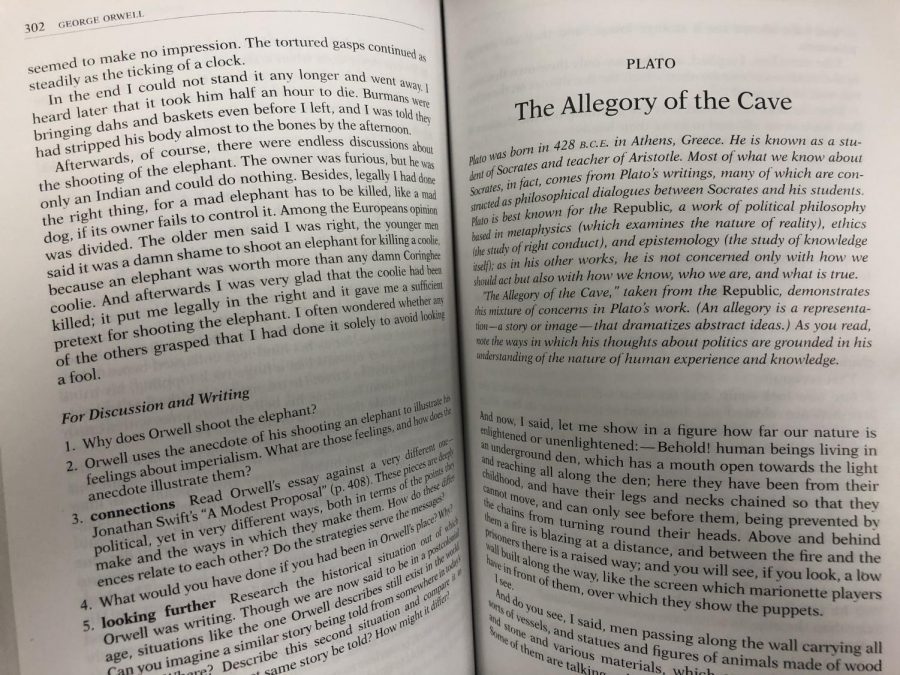 Plato's infamous "Allegory of the Cave".

Allegory – A story, poem, or picture that can be interpreted to reveal a hidden meaning, typically a moral or political one.

I used to think that I understood the depth of life, but my recent infatuation with the works of Plato enlightened me to a whole new world of possibilities.

His essay, the “Allegory of the Cave”, compares the inner-workings of life to a cave. Although there are many ways to perceive his analogy, I applied it to the human mind. The cave represents the darkness each person has within them – which will continue to dominate someone’s thoughts until they look outside their initial beliefs and perceptions – while moving outside the cave symbolizes being receptive to new experiences, also known as the light.

With this article, however, I don’t want to spend too much time analyzing Plato’s words, but sharing some of my own. There is no “right” answer for what life’s purpose is. All I have is my opinion, developed through years of gaining knowledge and listening to an abundance of perspectives.

To tackle the age-old question of the “meaning of life”, I believe it’s to help others and better yourself in the process. This requires putting yourself first, although it may seem selfish, and only then can you truly enlighten other people. Focusing on you doesn’t mean living in a bubble of self-centered ignorance. I define it as opening your mind to new possibilities and concepts. Simply put, discovering yourself and what you can offer to the world.

After all, if your plane crashes, you need to put on your oxygen mask first before assisting someone else. Obviously, that’s an extreme analogy, but it goes to show you can’t give to others if you don’t have anything to give.

Once you come to your personal “enlightenment”, to quote Plato, you can begin the process of helping others to see what you’ve seen. In my opinion, at least, it’s your moral obligation to share with others the wealth that you’ve gained. Basically, the purpose of life could very well be to put both yourself and others first.

In doing so, you’ll likely come across people who refuse to accept your knowledge. Those are the ones who put strong effort into maintaining a closed mind. In Plato’s text, for example, he represents the inflexible as prisoners chained to the inside of the cave. They forever remain in the confines of their own mind. I perceive this as choosing to live your life glued to concepts you created through personal judgements and opinions.

These chains that the prisoners are shackled in, what do they represent? Circumstances beyond your control may contribute to that. Background, culture, and environment all generate your view of the world. But what if these obstacles are self-made? The arrogant consciously choose to live within the barriers they’ve created. Are some people, per say, choosing to stay in the cave?

Sometimes, it’s hard to tell. While it may make the enlightened one’s job increase in difficulty, the importance stays the same.

I think the world “enlightened” within itself is profound. By its very name, the world implies that someone who seeks and absorbs knowledge is gaining light. The concept of light is represented as being insightful, and on the contrary, darkness is being ignorant.

Returning to Plato’s allegory, you experience the true light only if you escape the cave. He includes fire in the analogy, which is the only source the prisoners have within the cave. This could possibly represent manufactured concepts that the prisoners absorb without knowing the true source.

But when you go outside, the source of energy is from the sun. As most people know, however, if you look at the sun for too long, you develop a blind spot in your vision. This can also be taken figuratively.

The sun represents all that is pure: unfiltered truth and wholesome ideas. But if you try to internalize the affluence all at once, it’s going to hurt. Humans can’t necessarily handle the concepts in general, not to mention immediately.

Looking at it from a different perspective, the figurative blind spot could also be a punishment from attempting to seize the truth. Not all who seek out answers are doing it for the right reasons, in actuality, some are greedy. The ones who take the most may be more likely to keep it all for themselves. Relating this to modern society, it’s the exact reason why the wealthy become wealthier and the worse-off keep losing more. This idea that the prosperity will eventually “trickle down” to the less fortunate is questionable. If someone is taking something intentionally, do you really think they’re inclined to share?

And once again, I end where I began. I expressed earlier that I believe it’s possible to better yourself while bettering others in the process, but does this mean all people? How about the ones who carry hatred and malice in their hearts? Would you be sacrificing yourself to save someone who will only bring you down?

These questions still remain unknown, along with everything mentioned in this article. My opinion is subjective, as is yours. No matter the beliefs and values this society holds, one thing is for certain: There’s always more knowledge to be found.