Faculty Column: Winners Win, IF They Are Allowed to Play 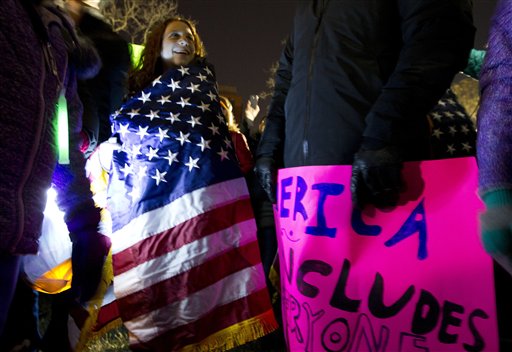 Demonstrators holds banners as they protest during a march in downtown Washington in opposition of President-elect, Donald Trump, Saturday, Nov. 12, 2016. Tens of thousands of people marched in streets across the United States on Saturday, staging the fourth day of protests of Donald Trump's surprise victory as president. (AP Photo/Jose Luis Magana)

The following commentary is a response to an article that appeared in the Faculty section of The Knight Crier following last week’s Presidential election.  In the interest of fair and balanced journalism, some of the staff believe that an alternate viewpoint should be available to our school community.

To summarize the article “Winners Win,” the author asserts that to be a winner, you must set a goal and work hard to achieve it and that “[t]here are no roadblocks big enough for [you] to [go] through, go around, go over, or go under.” He continues that if you encounter a problem achieving your goals, you should “fix it” and [i]f [you] don’t know how then [you] ask around or figure it out [yourself].” Additionally, he stresses that “[i]f you think your success is dependent on external factors – anything outside your control – then you have already lost.” He also asserts that you should not wait for policy changes or laws to help you. He concludes that this advice is suitable not only to his own children but also to the students at North Penn.

While this article was meant to be inspirational, it was also overly simplistic and overlooked the complexity of the issues dividing the country and which impact each of us personally.  During this long and highly unconventional Presidential race, I found it especially difficult to navigate questionable ethics and inappropriate behavior with my seven and ten-year-old children, especially regarding some name-calling and treatment of specific groups.  One concept I had to explain to my children is that even though all Americans are equal according to the law, they do not necessarily have equal opportunities.  While we all believe in the value of living in a nation where anyone can achieve their goals if they work hard enough, it’s an oversimplification to suggest that EVERYONE has this same opportunity.  Some have many more hurdles than others; in fact, many have insurmountable challenges that make this popularized American dream virtually unachievable.  In short, winners win–if they are allowed to play.

For example, one of my former colleagues worked hard in college and applied for a position in the science department at North Penn in the late 1960s. The administrator at the time leafed through all of the applications and said he did not want any women teaching chemistry.  The first male name that caught his eye was “Barrie,” and he submitted “Barrie’s” application to the human resources department.  “Barrie” was hired and happened to be a woman with an uncommon first name. Barrie told me she had heard about the circumstances of her employment months after she was hired. Barrie Finnemeyer and her husband Jim devoted decades as teachers and leaders at North Penn HS, none of which would have happened if she had not been unwittingly allowed to play. Even though that was years ago, discrimination against females continues.  More timely is Fox News journalist Megyn Kelly, who endured sexual harassment by both former Fox News Chairman, Roger Ailes, which resulted in his resignation, and then candidate Trump, who resorted to alluding to her menstruation cycle in response to a question she asked during a debate that he did not like.  So, what “roadblock” do all of these cases have in common?  Gender.  How should these women, and all women, “fix” their gender if it is stopping them from achieving their goals?

To be fair, there are some “roadblocks” you can fix, but should you?  What if you have dreams of playing a Division 1 college sport and you have some real talent, but you are told you are not
“big” enough. Do you “go around, go over, or go under “that roadblock by taking performance enhancing drugs so that you can achieve your goal by artificially making yourself more physically competitive?

Julie Chen from CBS’s The View and Big Brother did something comparable.   According to Chen, her TV news producer told her when she was 25 years-old, ‘’ ‘You will never be on this anchor desk, because you’re Chinese.’ He said, ‘Let’s face it Julie, how relatable are you to our community? How big of an Asian community do we really have in Dayton? On top of that, because of your heritage, because of your Asian eyes, I’ve noticed that when you’re on camera, when you’re interviewing someone, you look disinterested and bored because your eyes are so heavy, they are so small.'” She confessed in 2013 that she had plastic surgery to make her eyes look bigger.  What was Chen’s “roadblock”? Her race.  Well, she did attempt ‘fix” it.

If we accept this “Winner’s Win” philosophy, are we then endorsing the use of unethical and illegal methods to “win” at any cost when the obstacles are truly insurmountable? For example, steroid use is illegal and unethical. Chen’s plastic surgery was legal, but was it ethical?  Should Americans have to change who they are – what identifies them as an individual– in order to reach their goals? In my opinion, no. In America we have a long tradition of minority groups, and those who support them, working together through lawful means to change policy and create laws so that all Americans can remove insurmountable “roadblocks” to their ability to achieve success.  We should not endorse any advice that advocates that anyone should “fix” their gender, race, religion, sexual orientation, ethnicity or whatever is preventing them from winning. Laws such as Amendments XIII, XV, XIX and XXVI of the US Constitution, the Civil Rights Act of 1964, the Americans with Disabilities Act, Title IX and the Same-Sex Marriage Law were written precisely to protect those who face insurmountable biases, who most often never even had a chance to “play” let alone “win.”

This presidential election was driven by everyone’s desire to be a winner.  Trump advocates want America to be “great again” to return to the prosperity and safety we experienced in the past.  Clinton advocates wanted to ensure that every American could achieve the American dream.  The challenge we face as a nation is to unite behind the ideal that ALL people, regardless of race, creed, ethnicity, gender or economic circumstances have the right to play so they have the opportunity to work hard and win while playing by the rules.