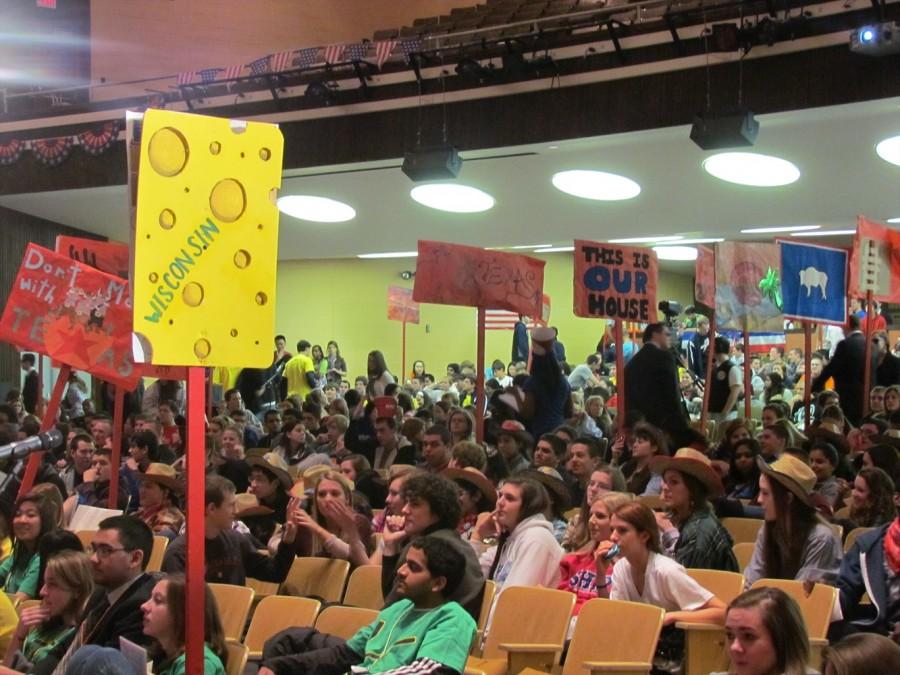 POLITICKING: This scene from the 2012 Simulated Republican Convention at NPHS will be revisited in January as NP holds its 2016 simulated convention.

This week, thousands of high school students from North Penn will push their school bags into the corners of their bedrooms, take a deep breath, and begin to enjoy their holiday break to round out 2015. In fact, for the hard working high school students who spend hours every night on homework, juggle sports and extracurricular work, and stress over college applications and acceptance letters, the break is timely and certainly deserved.

While the down time is important, and the extra time catching up with friends and family is invaluable, the week away from the daily grind also serves as an opportune juncture to catch up on something else… politics. I know, I know… snapchat sounds much more appealing. But, really – hear me out. The political world is certainly interesting right now. Whether it’s for entertainment value, intellectual stimulation, or genuine concern, there are many reasons to immerse ourselves in American politics and international affairs right now, not the least of which being the upcoming Mock Convention at North Penn High School on January 5th and 6th.

Essentially, the premise of the article is that young voters feel a disconnect with politics because “They just see little self-interest in politics.”

This article is based on about 80 college aged students interviewed at Penn State. Among the students participating in the discussion was the prevailing sentiment that, “Most are confident they’ll find jobs. They don’t have to worry about compulsory military service. They can stay on their parents’ health-care polices for several more years. The high cost of college is a big concern, but few see the government making things easier.”

Lightman goes on to add, “By one measure, just one in five were politically engaged, according to a recent survey by the Harvard University Institute of Politics.”

OK, so let’s take these findings and bring them back to high school students. Most likely here at North Penn students have very similar feelings, and I do not contend that those feelings are to be marginalized or dismissed; the notion that “government decisions do not affect me” is probably, at least for the moment, generally plausible for most high school students. That said, I do also contend that such a sentiment is not going to hold true forever. It is perfectly okay for a student to feel frustrated with government, politics, international affairs, and American policies if said student actually understands certain concepts of each. To know about, and hopefully understand, and then be frustrated is totally acceptable. To not take time to know about, investigate, or understand and then say “I’m sick of it,” is much less acceptable. How can we be sick of or disconnected with something we do not even know about?

So where am I going with all this blubbering about politics? In addition to English, I teach Journalism and Public Speaking. If there are two courses where it would seem the current political environment is applicable, Journalism and Public Speaking have to be near the top of the list. So, naturally I spent a good deal of time encouraging my students to watch the most recent presidential debates. Why? Two main reasons: 1) We have an incredible opportunity coming up here with the Mock Convention and 2) Because when most of my students graduate college, the next President will just be finishing his first term in office. After the last Republican debate, I polled my Public Speaking class to see how many watched. Keep in mind that this class spent three days with a guest speaker who is currently working for Marco Rubio’s campaign, and then they wrote and delivered their own campaign speeches, so this is a group who has been exposed to the political process. Out of 24 students, no more than 4 had watched any of the debate. I wasn’t angry… but, yes, I was disappointed. The holiday break is a perfect time to reverse that apathetic interest in what is a volatile political and international climate by which we are currently surrounded.

The world in which current NPHS students will be looking for a job, possibly searching for an affordable place to live, managing student loans, and trying to feel safe is a world that will, like it or not, be heavily influenced by the president we elect in November 2016. Whether a student is of voting age by then or not, there are plenty of reasons to know who the candidates are, what they stand for, and what the issues are facing our community, school, nation, and world.

High School students have tremendous power. They have the power to stay connected, to access information in seconds or less, voice their opinions to the world, and influence others – voters included. What I would love is to see our students get excited to use that power wisely. In her closing statement in Saturday evening’s Democratic debate Hilary Clinton said, “May the force be with you.” Her Star Wars reference may have been an attempt to appear connected or just a foray in humor, but regardless, the words are true. Young Americans can have the force with them now and at the end of the next President’s first term… if they choose to understand the force they have.

When NPHS holds the Mock Convention next month, the Social Studies Department will be placing an incredible opportunity for growth on a silver platter for North Penn students. There is so much to gain from getting involved in and understanding the issues at hand, the party platforms, and the candidates running on those platforms. Going into that convention with a sound bit of knowledge on these matters will make those two days an invaluable experience, and who knows where some new interests or motivation might take students going forward. The first step though to making that convention a valuable experience is spending some time over the holiday break learning about our political climate and the issues that are driving it. Doing so will bring those two days to life, and, oh by the way, is also important for anyone who will be functioning in the world influenced by our next President.

And so, this commentary is my plea to high school students: Watch the news, spend some political quality time with Youtube, read a newspaper, and become part of this process. If you become part of the process, you can choose to be angered and frustrated by it. You have that right. But to not learn about it, is to then choose to be voiceless and powerless. Embrace the power you have, and may the political force be with you .