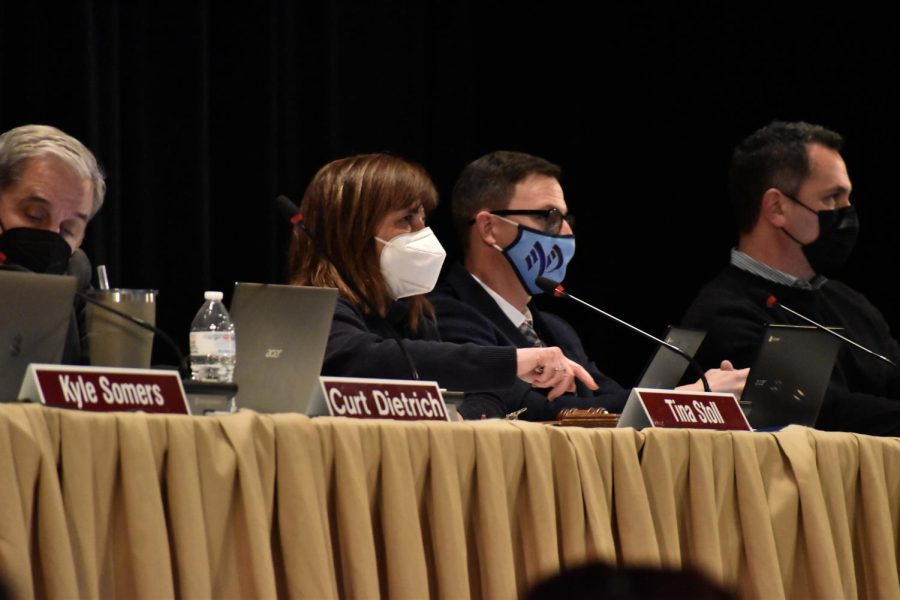 North Penn School Board acknowledges the photo of a teacher taping a student's mask to their face at the January action meeting.

Only days after the photo of a North Penn teacher taping a student’s mask to their face circulated, not only within the district, but across the country, the North Penn School Board met for their January action meeting faced with a significant audience consisting of parents, students, community members, and multiple news outlets who were covering the meeting.

The district released an official statement before the meeting acknowledging the situation and how even though “the incident was isolated and no malice was intended” it was “entirely inappropriate and unacceptable, no matter the context.” While this is a heated topic at the moment and many people want answers, the Board is currently unable to disclose any further information as all personnel and student matters are confidential.

A statement from the student’s mother was also sent out through social media via North Penn Now, stating that she in no way gave permission to any news outlet or social media platform to spread the photo of her son and that she sent the photo to a small group without the intent of it being spread further than that.

“While I appreciate parents and groups alike coming to our defense, as stated above, what this has evolved into is exactly what I wanted to avoid,” The student’s mother said in her statement. “Make no mistake, what we are going through because of all of this pales in comparison to the incident itself, which, I will emphasize, was serious in itself. Now, in addition to having to deal with the aftershock of this from the local community and, for my son, his friends, and classmates, we are in fear that our identity will be leaked and we will find a host of parents and news cameras on my front step. If I had any idea that this would evolve to such a level, I would never have permitted it to be shared with that private group.”

Prior to reading those statements, the Board recognized the North Penn Marching Knights for their outstanding achievements this year as they have preserved through covid to have an extremely successful first semester. Introduced by Mr. Joseph Santanello, almost every Marching Knight showed out to receive recognition by the Board and the whole North Penn community.

“It was such a privilege to see the Marching Knights perform and how they commanded the field and tonight in this room they filled it,” Board director Juliane Ramić expressed. “I’m so grateful that so many of them were able to come tonight… and from this view on the stage, it was truly an honor and a privilege to be able to recognize them and all who support them.”

In the first Audience of Citizens, comments varied from the topic of masks, vaccines, Covid testing, and the special education program, the latter having been brought up just as much as the other topics in the past couple of meetings. Multiple parents, students, and administrators spoke on the topic of the special education program saying they are dissatisfied with the way the program is being run.

The meeting progressed quickly after the hour-long first public comment and when it came time to vote, the Board voted almost entirely unanimously with the exception of Dr. Elisha Gee voting no for the Health Care Clinic Design Contract making that a final vote of 8-1.

From a question by Dr. Gee, Superintendent Dr. Curt Dietrich clarified how the district utilizes the Elementary and Secondary School Emergency Relief (ESSER) funding provided by the government and where they can and cannot use it.

In the Finance update, Dietrich reminded the community of the upcoming budget process for the next four months as  Chief Financial Officer Mr. Steve Skrocki was not present at the meeting.

“We will have twice a month meetings coming up now for the next four months as a part of the 2022-2023 budget process and these meetings do include a deep dive into every department budget in the district, they are an excellent way for the community to learn more about school district finances,” Dietrich said. The board highly encourages community members who are interested in district funding to attend these meetings to better understand how funding works.

The meeting adjourned after another half hour of public comment. The next School Board meeting will be a work session on February 8 at 7 pm.