2016 NPHS graduate Katie Solomon has the unique task of serving as Executive Director for what will have to be a virtual version of Penn State's biggest event. 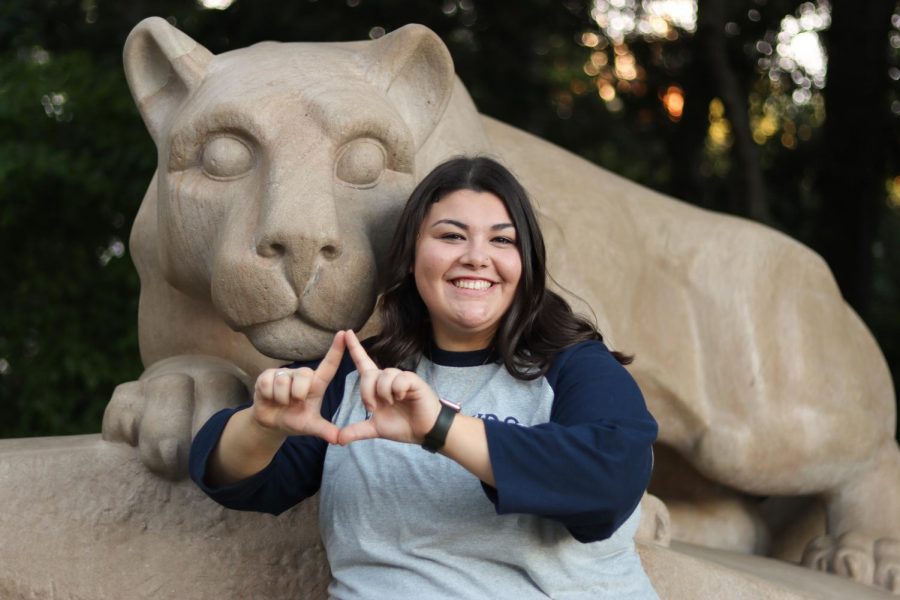 Katie Solomon, 2016 NPHS graduate, at the famous Nittany Lion statue on the campus of Penn State University. Solomon is the Executive Director of PSU's Thon in 2021.

STATE COLLEGE, PA – An array of colorful lights, booming speakers projecting live music, thousands of students dancing with all of the energy they can muster for several hours straight. These are the typical sights and sounds of the biggest event of the year at Penn State University, Thon weekend.

For class of 2016 North Penn graduate and 5th year senior at Penn State University, Katie Solomon, the responsibility of Executive Director of Thon weekend rests on her shoulders, although things will look much different for Thon in 2021 due to the global pandemic.

From the beginning of the college process, Solomon knew she wanted to go to Penn State as that was the only school she applied to in the first place. The biggest reason for her was the sense of community she felt while on the campus.

“I got to come to visit Penn State when I was in high school because my sister was a student here while I was in middle school and high school. When I got to visit I got to do a couple different things: football games, concerts, all of the traditional Penn State things,” Solomon said.

“What really did stick with me was the sense of community I felt here, even though I wasn’t a student I could still tangibly feel and see how exciting it was to go to Penn State.”

Solomon knew she wanted to become involved in Thon even before she got to Penn State. During a visit with her sister Carrie, she was able to go to Thon weekend and see what it was all about. She again referenced the community as a draw into the event.

“My sister went to Penn State, and one of the times I visited her I went to Thon weekend because she was a dancer. She was standing for 46 hours to show support for families, and I got to visit her that weekend in 2014. I was just so blown away again by that sense of community and passion that drew me into Penn State in the first place, and then because of that experience I knew when I got to Penn State that I wanted to get involved so my freshman year I joined a committee and everything unfolded from there,” Solomon stated.

As to what exactly Thon is, it is the world’s largest event run by students. They are able to recruit thousands of students to help volunteer to facilitate the event. Thon is held to help raise money and bring support to families affected by childhood cancer. This event has helped pay for many families medical expenses while going through treatments.

“Penn State Thon is the world’s largest student-run philanthropy. We have 16,500 Penn State students volunteer annually and we put on different events, initiatives, and fund-raising campaigns all year long to support children and families affected by childhood cancer. We have ensured that over 4,000 families have never seen a medical bill while also ensuring that we provide emotional support,” Solomon explained.

It was just over a week after the Coronavirus started to make its impact in the country that Solomon found out that she would be in charge of the biggest event in the country. However, the lead up to this was not all that easy-going for her. Solomon was surprised by the previous executive director from outside her house.

“I applied on a Wednesday, interviewed on a Thursday, and I found out on a Friday all in the same week. It was a very stressful 48 hours after I handed in my application, and I was selected on March 12th, which was just a week after Covid really hit the United States. In order to do everything safely, the person who was letting me know I was selected, last year’s executive director,  got outside of my window and held up a sign and was cheering,” Solomon recalled.

After she got this news, Solomon had a mix of several different emotions when coming to the realization that she was in charge of this event. Almost every emotion that someone can feel went through her body at this moment.

“I remember thinking at that moment that my life was going to change. I was kind of scared and nervous and unsure about everything that was yet to come, but nevertheless just so excited and thankful for the opportunity because not many students ever have the opportunity to do something like this,” Solomon explained. “So a combination of fear, overwhelmed, thankful, excited, and overall really happy.”

Solomon’s primary responsibility as executive director encompasses overseeing the executive committee. This committee is responsible for running several different aspects of Thon from donations to hospitality. She also is the liaison between Penn State and a couple other companies. She keeps in communication between everyone as the liaison.

“My primary responsibility is to oversee the executive committee. This is 16 directors on 16 different committees and they do everything from donations to hospitality which is in charge of serving food at events to family relations,” Solomon said. “Besides that I am the primary liaison between Penn State Thon and our sole beneficiary, Four Diamonds at Penn State Children’s hospital, which is where all of our money goes and all of our families are based out of. I also am the Primary liaison for the Penn State administration so I work with different contacts to make sure that Thon information is available across the board. I have other relationships here and there but I do manage those and that is what keeps the job fun.”

The transition to a virtual Thon has been an interesting one to say the least. They have had a system at Penn State for 48 years and all of a sudden that gets thrown out the window this year. The staff of Thon including Solomon had to adapt the system to try to accommodate for a virtual event.

“Thon has been going on for 48 years, and because of that we had a really good system in place when it came to getting things done, getting out invites, doing setup, teardown, all of that really good stuff when it pertains to thon weekend, so making it virtual has been really tough because it’s the first time we’ve done anything to this scale online, let alone anything online at all,” Solomon stated.

For obvious reasons, the virtual world has provided some unique challenges to Thon. The internet will have to cooperate in order to make it go smoothly. Also, students have to navigate making segments for Thon while also trying to avoid the Coronavirus.

“Some of the challenges have been figuring out how to get people involved safely, within Covid guidelines, so always wearing masks and distancing. If someone is going to record a segment for Thon weekend, how can they do it without running the risk of contracting covid. Also, technology issues like figuring out how to get the stream to be compatible with all of our needs, and trying to make sure that Thon is still engaging for families since they can’t be with us in person,” Solomon explained.

As far as how North Penn experiences have prepared her for this responsibility, Solomon has used her developed ability of communicating with lots of people to her advantage. She also says that the Thon committee is a similar environment to that of SGA at North Penn High School.

“Being SGA President, I had to lead a committee of other students, and I think that, as well as having to communicate with the North Penn High School principal, advisor, and other peers, prepared me really well for Thon because Thon is entirely student-run. So I work and collaborate with people my age every single day and they are also my best friends. This creates a very similar environment to SGA,” Solomon said.

The committee and Solomon are working their hardest in order to make Thon weekend seem as normal as it possibly can be. They are going to do the standard events that draw so many students to thon in the first place as if it were a normal year.

“We still are doing the staple events that Thon is known for and gets people excited. We have the pep rally, a fashion show with kids, talent show, celebrity guests and performers. All of that really high energy engagement,” Solomon stated.

Solomon knows organization is key to manage her time. She accomplishes this by scheduling as much as she can so she knows exactly what she will be doing each day by the hour. She also has picked up time management skills throughout her previous years at Penn State.

“My Thon responsibilities do take up all of my time and then some. I’ve been involved with Thon since freshman year; I have worked on my time management skills since joining,” Solomon explained. “Every year I’ve gotten a little more involved so it is a gradual increase that I’ve been able to manage over time. Something that I do is schedule like crazy. That way if anything comes up I can say sorry, I have something to do, or I have personal time scheduled, or homework time scheduled. This helps me hold myself accountable.”

Solomon takes her responsibility as executive director of Thon extremely seriously and she hopes that the hard work of not only herself, but everyone on the committee through these unique times will make Thon weekend a huge success.