The panel focused on the abilities of school districts, the police, and victim advocates to protect students. 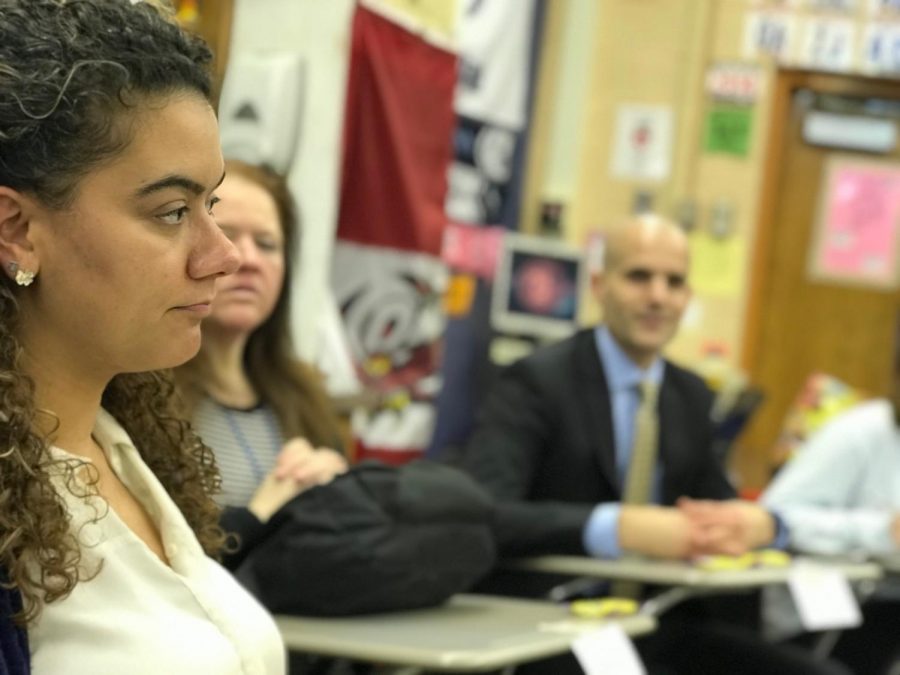 TOWAMENCIN – Health and Physical education teacher Kathleen Kelley doesn’t mince words when discussing an issue she feels is all too common — both in the North Penn community and beyond.

“With the statistics showing that 1 in 3 women and 1 in 6 men, in their lifetime, will experience some sort of sexual violence, unfortunately, if it hasn’t happened to a person yet, probably, in their lifetime, it will happen to them or someone they know,” said Kelley. “We can prevent that, and we can lower those statistics [and provide] people with the knowledge and the power to make healthier choices.”

Students got the opportunity to do just that on Tuesday, January 21st, when the Various Voices Club, of which Kelley is the advisor, hosted a panel discussion on one’s legal and educational recourse related to sexual harassment or violence. While the conversation originated as a response to an influx of unsolicited nude pictures received by North Penn students (which can warrant child pornography charges), its scope expanded to include the function of schools, victim advocates, and police investigations in the aftermath of a sexual assault.

Natacha Rivera, a Systems Outreach Specialist with the Victim Services Center of Montgomery County, explained the role of a victim advocate in navigating the criminal justice system.

“We provide this layout of info… so [a person] can make an informed decision,” stated Rivera.

From accompanying survivors to a hospital or police station to obtain a civil protection order (a legal document intended to prevent contact between the victim and perpetrator), victim advocates are available twenty-four hours a day to assist with nearly every aspect of a case, including helping survivors file police reports — “as detailed as you are comfortable with,” emphasized Rivera.

Immediately after a sexual assault occurs, it is advised to go to a hospital with certified Sexual Assault Nurse Examiners, or SANE nurses, who are trained to collect DNA evidence from a victim. This evidence is referred to as a “rape kit,” and it is often used by police investigators to prove guilt and obtain criminal convictions in court.

(While Lansdale Hospital does not have SANE nurses on staff, Rivera confirmed that Abington Main Campus, Bryn Mawr, and Lankenau hospitals are equipped with SANE nurses and can adequately perform rape exams.)

Throughout the entire process, Rivera said, “if at any point you’re uncomfortable, you can voice that.”

From there, advocates will explain the victim’s rights and police will arrive to collect the completed rape kit. The police will also ask the victim if they would like to file a report; if so, they may take a formal statement.

While neither victim advocates nor school administration are permitted to participate in or interfere with an active police investigation, there are several measures that schools can take to protect concerned students.

Nicholson advised concerned students to “start with a trusted adult,” whether it be a teacher, counselor, or member of the administration. From there, the school has the power to arrange accommodations. “We have moved the victim out of the class… we can’t necessarily move [the accused],” he said, citing the risk of interfering with a police investigation. “We want to do what’s right for the student,” Nicholson continued, but as a public school, North Penn is bound by confidentiality rules that prevent actions that have the potential to interfere with education — of either the victim or the accused — from being taken during an active investigation.

However, Nicholson noted that the school administration can take action in instances of continuing harassment, as “we have a responsibility to keep that student safe.” These actions can include suspension (in cases of persistent harassment or threats) and the creation of school schedules that can separate two students.

Various Voices Club president Rebecca Farley concluded, “I think it’s very important to come to clear up things that maybe were misconceived, and just to set the record straight of what [North Penn, Victim Services Center, and the police] can do for us [and] what the procedure is.”

The Various Voices Club will host Detective Jamie Pierluisse on Thursday, January 30th, to discuss the law and police investigations related to sexual harassment and assault. All are welcome.