Today's NPHS seniors were only in 2nd grade when the decade began. Here's a look at what happened in the NPSD over the last 10 years. 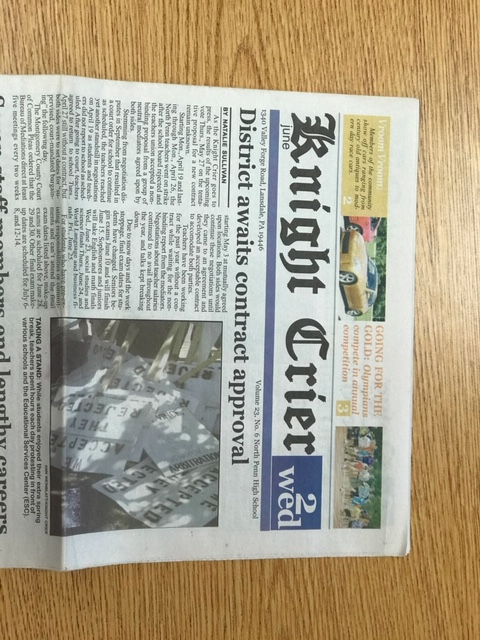 Back in September of the 2014-15 school year, junior Madison Wiernusz broke down the major changes in the Cookie Corner due to new federal government dietary guidelines. The Cookie Corner’s menu changed into what is offered today.

9.The King of North Penn Meets the Queen of Daytime TV-October 27, 2018 https://www.knightcrier.org/student-life/2018/10/27/ben-hartranft-reflects-on-his-appearance-on-the-ellen-show/

Just last year, “Mr. North Penn” himself, Ben Hartranft, got a once in a lifetime experience by being invited to appear on “The Ellen DeGeneres Show.” Ben was surprised by Ellen and former Eagle Jon Dorenbos with Universal Studios tickets, an Eagles gift basket, and $10,000 for the Eagles Autism Challenge. Reflecting with former editor Allison Lacianca, Ben said “I’m still pinching myself, I’m still on cloud nine. It was so crazy seeing myself on TV!”

Shortly after winning Super Bowl L in 2016, Class of 2009 alum and current Denver Bronco Brandon McManus returned to North Penn High School. McManus made the visit as part of his “victory tour”, and wanted to thank the North Penn community for all of their support leading up to the game. “Just to have the support back home, it means a lot of people are rooting for you and it does put a little pressure on you to not let them down. But games [with] that magnitude, you kind of need some added pressure. I definitely wanted to succeed and perform well for everyone back home and hopefully I made [the community] proud and helped celebrate this Super Bowl win with them,” McManus told former staff writer Cydney Lee.

7.Budgetary Issues a Constant Throughout the Decade-https://www.knightcrier.org/news/2012/03/14/superintendent-meets-with-community-on-budget-concerns/

Back in March of 2012, Superintendent Dr. Curt Dietrich held a community forum at NPHS to discuss a variety of topics related to the budget, such as block grants. Managing and making deicisons regarding the budget has been a constant issue for the district and School Board throughout this decade, and will likely continue into the 2020’s.

From April 19 until April 26, 2010, North Penn teachers went on strike “when the school board rejected a non-binding proposal from a group of neutral mediators agreed upon by both sides,” per the June 2, 2011 edition of The Knight Crier.  Teachers had been without a contract since the beginning of the 2009-2010 school year, and the teacher’s union rejected the most recent proposal. That school year ended far later than usual, with finals occurring as late as June 25.

North Penn’s School Board made a historic move of implementing Full Day Kindergarten in September 2018, which took effect in the 2019-2020 school year. Former Board Member Theresa Prykowski, the sole member to vote no, said that “I think the seniors in the community will be hurt by [full day kindergarten] and it’s coming down too fast on a lot of the local kindergarten providers. And we need renovations for Knapp and the high school.” Board Vice President Christian Fusco, who supported the notion, voiced that “every child in North Penn is going to have an opportunity to strengthen their academic, social, and emotional skills. This is good for the community. North Penn is catching up with nearby districts. It’s an investment in our most precious resource – our children.”

Very few people can say that they have been a part of North Penn for more than four decades. Former NPHS Principal Burton Hynes is one of those people. After teaching at Pennfield for two years, NPHS for 8, becoming a NPHS assistant principal for 18 years, then to Penndale as Principal for 5 years, and 12 years as NPHS Principal, Hynes said goodbye to the North Penn School District in 2015. Hynes oversaw some of the biggest changes in the history of NPHS. Per fromer Editor Tara Sorman, “Hynes has overseen incredible changes at North Penn,“driving renovations to facilities like the new swimming pool, expanding the international exchange program to France, Spain, and Japan, and watching technology take root in the form of computers, Smartboards, and iPads. But at the crux of Hynes’s time as principal has been the renewed commitment to student success.”

Over the past decade, quite literally thousands of events, games, tournaments, concerts, club meetings, swim meets have taken place across the North Penn School District. Arguably, the most impactful thing to happen this decade is the legendary Doc Ryan retiring from his position as NPHS Athletic Director after 46 years of service. Ryan joined the District in 1969, became Assistant to the Athletic Director in 1971, and Athletic Director in 1981, a position he held for 34 years. In October of 2014, Ryan was inducted into the North Penn Alumni Athletic Association Hall of Fame. In Doc’s final days at NPHS, he was surprised with a ceremony in the gym to honor his nearly 50 years of commitment to the North Penn School District. Dr. Dietrich, PIAA Basketball official and Executive Board member of the North Penn PIAA Basketball Officials Chapter Tommy Blackwell, 2013 graduate Eddie Posavec, Principal Hynes, and Mr. Heller all spoke about what they admired about Doc and how he impacted each of their lives.

Former Knight Crier staff writer Evan Hayes said it best-”Ryan is a legend, a figurehead, and simply a great man. Through his words and actions, he cast his light brightly on the athletes he mentored through the years, and never stopped working for every single North Penn High School athlete, whether they knew it or not. The success that he presided over while at North Penn were second to none, and he is a shining example to every student who came through the halls of North Penn. Donald Ryan will be an example for athletes for generations to come, who can learn not only how to act on the court, but how to succeed in all areas of life: keep a level head, and never accept less than your absolute best.”