The Biggest News of Summer 2019 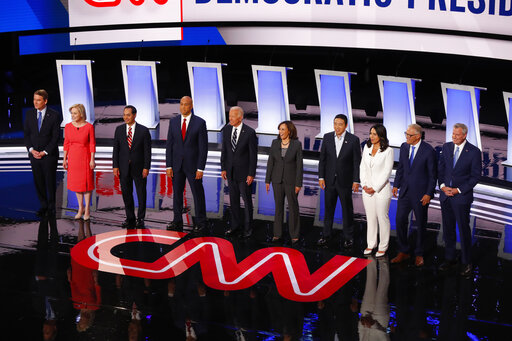 Even though the halls of North Penn become desolate come late June, the halls of Congress and the hustle and bustle of Washington D.C never stops. Since NPHS students didn’t have the Knight Crier popping up in front of them each morning, we can only assume that you were less informed over the summer. To get you back up to speed with all of the craziness that is a news cycle in 2019, here is what you missed from Summer 2019.

20 Democratic Presidential candidates met in Miami for the inaugural debate of the 2020 campaign. Frontrunners Joe Biden, Kamala Harris, and Bernie Sanders had the opportunity to discuss policies and go head-to-head for the first time. Lesser known candidates, such as Tulsi Gabbard, Andrew Yang, and Marianne Williamson had their first opportunity to inform the American public about their policy ideas and what they think makes them worthy to be your next President.

On June 30, President Donald Trump made history by becoming the first sitting American president to enter North Korea. The meeting came at the end of the G20 summit in Japan, and seemed to be spontaneous, after Trump tweeted an invitation to meet with Kim Jong-Un.https://www.cnn.com/2019/06/30/politics/north-korea-kim-jong-un-donald-trump-meeting-moments/index.html

On July 12, President Trump announced that Secretary of Labor Alex Acosta would be resigning from his post. Acosta chose to resign over the fallout from his role in the Jeffrey Epstein scandal. Acosta was a U.S. attorney in Miami, and organized a non-prosecution agreement foe Epstein in 2008; an agreement that secretly ended a federal sex abuse investigation involving dozens of teenage girls.https://www.theguardian.com/us-news/2019/jul/12/alex-acosta-resigns-trump-jeffrey-epstein-plea-deal-latest-news

On July 23, the U.S. Senate passed The Never Forget the Heroes: James Zadroga, Ray Pfeifer, and Luis Alvarez Permanent Authorization of the September 11th Victim Compensation Fund Act, which fully funded the 9/11 Victims’ Compensation Fund through 2092. The fund supports 9/11 first responders who continue to have medical issues caused by the events of 9/11. The bill passed almost unanimously, with a vote of 97-2.https://www.silive.com/news/2019/07/us-senate-passes-bill-to-extend-the-911-victims-compensation-fund-through-2092.html

On July 14, President Trump tweeted, referring to four Progressive Congresswomen, “Why don’t they go back and help fix the totally broken and crime infested places from which they came.” There was intense backlash, as many saw the tweets as overtly racist, and the controversy was only made worse by a Trump rally crowd that broke out in chants of “Send her back!”referring to Somalia-born Congresswoman Ilhan Omar(D-MN).https://www.vox.com/2019/7/15/20694616/donald-trump-racist-tweets-omar-aoc-tlaib-pressley

This time in Detroit, 20 Democratic Presidential candidates met once again to hash out policy disagreements, sell themselves to the American people, and explain how they will beat Donald Trump. On Night One, Elizabeth Warren and Bernie Sanders, arguably the two most Progressive candidates, went head-to-head on a number of issues. Surprisingly, Warren faced criticism from Rep. John Delaney, who threw some punches at her over healthcare. Her response became one of the most memorable moments from both nights of debate.(https://www.vox.com/2019/7/30/20748007/democratic-debate-elizabeth-warren-john-delaney-2020) On Night Two, many lesser-polling candidates came at Joe Biden hard. Cory Booker and Julian Castro both had intense and headline making exchanges with the former VP. Unexpectedly, Rep. Tulsi Gabbard excoriated Kamala Harris for her criminal justice record. (https://www.businessinsider.com/tulsi-gabbard-slams-kamala-harris-criminal-justice-democratic-debate-2019-7) The next Democratic debate, airing from Houston on September 12, had stricter qualifications, and narrowed the field down to 10 candidates.

On August 3, a 21 year old white man walked into a Walmart in El Paso, Texas with an AK-47 and killed 22 people. It was the deadliest mass shooting in the US in 2019. The FBI is still investigating this shooting as an act of domestic terrorism and possibly a hate crime. It is important to remember the victims, and not the shooter-here are their stories. (https://www.cnn.com/2019/08/04/us/el-paso-shooting-victims/index.html)

Just 13 hours after the massacre in El Paso, a young white man opened fire in the popular Oregon District of Dayton, Ohio. Just 32 seconds after he began firing, he was shot dead by the police, but, using an AR-15, he was still able to kill 9 people and injured 27 others.-https://abcnews.go.com/US/victims-dayton-shooting-remembered-im-speechless/story?id=64780681

On the morning of August 10, billionaire and convicted sex offender Jeffrey Epstein was found dead by suicide in his jail cell.According to The Intelligencer, “The 66-year-old’s death came less than a day after a trove of disturbing court documents was made public offering details about his alleged abuse of dozens of mostly underage girls, as well who assisted him with or participated in the abuse”. The whole story is extremely complicated, so I recommend you read the rest of that article here: http://nymag.com/intelligencer/2019/08/jeffrey-epstein-dies-by-suicide-report.html

The Mooch Turns on Trump-August 12

Former White House Communications Director(for 11 days) Anthony Scaramucci had a major change of fate in August, as he has changed from outspoken supporter of the President to outspoken Trump critic-decrying his tactics as “pernicious evil”-https://www.mediaite.com/news/scaramucci-trumps-dividing-the-country-is-pernicious-evil-gop-should-reconsider-2020-ticket/ and declaring that Trump should be replaced from the GOP ticket in 2020.

On August 31, a recently fired truck driver shot 32 people from his truck on Interstate 20 in Odessa, Texas. The suspect was shot and killed by police after being cornered at a Cinergy movie theater. For an emotional first hand account of the shooting, watch this MSNBC interview-https://www.mediaite.com/tv/interview-with-witness-of-odessa-shooting-leaves-msnbc-anchor-in-tears-god-bless-you-and-your-family/.

Here are the stories of the victims-https://www.nbcnews.com/news/us-news/texas-mass-shooting-victims-include-postal-worker-truck-driver-n1048766