The National Emergency, but less confusing

Natural disasters, terrorist attacks, and foreign hackers? National Emergencies have a rich history, but it can be tricky to distinguish fact from fiction. 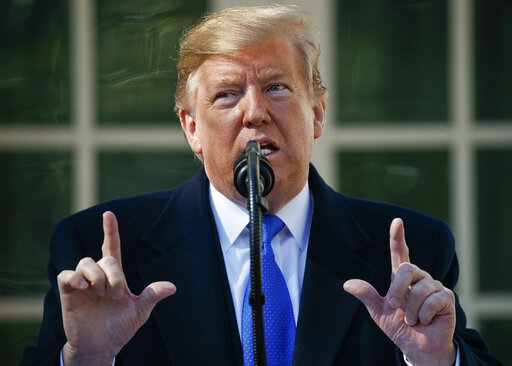 FILE - In this Friday, Feb. 15, 2019, file photo, President Donald Trump declares a national emergency in order to build a wall along the southern border during an event in the Rose Garden at the White House in Washington. California Attorney General Xavier Becerra filed a lawsuit Monday, Feb. 18, 2019, against Trump's emergency declaration to fund a wall on the U.S.-Mexico border. Becerra released a statement Monday saying 16 states  including California  allege the Trump administration's action violates the Constitution. (AP Photo Evan Vucci, File)

In light of President Trump’s recent declaration of a national emergency, here’s a brief recap of what’s going on and what comes next.

What is a national emergency?

It’s a way for the president to act in a crisis without having to wait for congressional approval (which, as we’ve seen, can take quite some time). 58 have been declared since the passage of the National Emergency Act of 1976, but no formal criteria exists for declaring a national emergency. Most involve international issues; it’s worth noting that presidents don’t typically utilize this law to further a domestic policy agenda.

What is the president’s rationale for declaring one?

According to his official proclamation, “the current situation at the southern border presents a border security and humanitarian crisis that threatens core national security interests and constitutes a national emergency,” due to it being a “major entry point for criminals, gang members, and illicit narcotics.”

What can the president do now?

A lot. But he highlighted the specific powers in the National Emergency Act that he plans to take advantage of:

“The Secretary of Defense, without regard to any other provision of law, may undertake military construction projects. . . not otherwise authorized by law that are necessary to support such use of the armed forces. Such projects may be undertaken only within the total amount of funds that have been appropriated for military construction.”

In short, this provision allows the president to use the military budget to construct a border wall; he failed to secure sufficient funding through Congress.

The president may “order any unit, and any member not assigned to a unit organized to serve as a unit, in the Ready Reserve under the jurisdiction of that Secretary to active duty for not more than 24 consecutive months.”

This gives the president the authority to send large numbers of troops, including the National Guard, to the U.S.-Mexico border.

When does this end?

According to the National Emergency Act of 1976, Congress must meet at least once every 6 months during a national emergency with the goal of passing a joint resolution to end it. In reality, though, that’s never actually happened. Otherwise, the president must formally end it by issuing a proclamation. The United States currently has 31 ongoing national emergencies. Most, but not all, involve international economic sanctions. Here are a few: