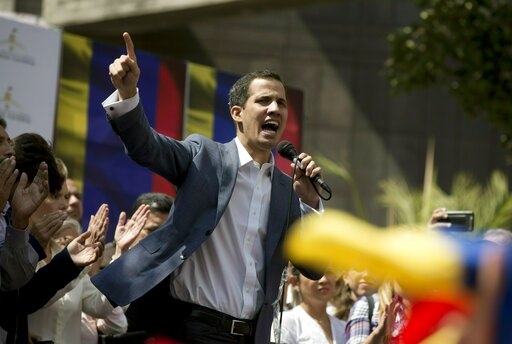 In this Jan. 11, 2019 photo, Juan Guaido, President of the Venezuelan National Assembly delivers a speech during a public session with opposition members, at a street in Caracas, Venezuela. The head of Venezuela's opposition-run congress says that with the nation's backing he's ready to take on Nicolas Maduro's presidential powers and call new elections.(AP Photo/Fernando Llano)

In light of the recent leadership crisis in Venezuela, here’s a quick summary of how the country’s political situation reached its breaking point.

It depends on who you ask. President Nicolás Maduro, a Hugo Chávez-era socialist, lost international influence after winning a second term in a fraudulent election. On January 23rd, 2019, Juan Guaidó, the president of the Venezuelan National Assembly, declared himself the legitimate president of Venezuela, infuriating Maduro.

Is he even allowed to do this?

Guaidó’s rationale: because Maduro’s re-election was rigged, the Constitution of Venezuela’s succession rules are currently in effect. These rules specify that the President of the National Assembly should govern in the event that “the president-elect is absolutely absent before taking office.” Therefore, Guaidó himself is the rightful president of Venezuela. (Once in office, he plans to hold democratic elections.)

In late January, around the same time as Maduro’s inauguration, agitated Venezuelans flooded the streets of Caracas to protest inflation (amongst other things, Maduro printed his own money) and ongoing food and medicine shortages. Guaidó swore himself in as the interim president and was granted diplomatic recognition by the United States, Canada, and most of Europe, as well as many Latin American countries. In response, Maduro gave U.S. diplomats 72 hours to leave Venezuela, though he later withdrew that deadline.

How does this affect the U.S.?

We’re not sending “5,000 troops to Colombia” á la John Bolton’s notepad, nor do we plan to put boots on the ground in Venezuela. We did, however, airlift humanitarian aid (food and medicine) to the Venezuela-Colombia border.

What’s this about a blockade?

Supplies are set to enter the country on February 23rd, but Maduro’s loyal military is prepared to blockade critical roads and bridges. Guaidó claims that the aid will still be delivered by Venezuelan volunteers.

If Maduro fulfills his promise by blocking humanitarian aid, well. . . he will have prevented food and medicine from reaching his country’s poorest citizens. However, Guaidó’s overt alignment with the United States risks playing directly into Maduro’s narrative; Maduro claims that humanitarian aid is simply a mask for unwelcome American military intervention in Venezuela.