EDITORIAL: I’m a high school journalist. Here’s why Jamal Khashoggi matters to me.

On October 2nd, journalist Jamal Khashoggi walked into the Saudi Arabian consulate in Istanbul. He never came out. 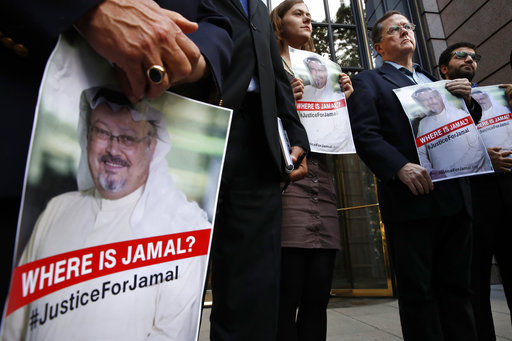 Alyssa Edling, center, and Thomas Malia, second from right, both with PEN America, join others as they hold signs of missing journalist Jamal Khashoggi, during a news conference about his disappearance in Saudi Arabia, Wednesday, Oct. 10, 2018, in front of The Washington Post in Washington. (AP Photo/Jacquelyn Martin)

My experience with journalism primarily consists of transcribing hours of interviews by the harsh glow of my laptop screen. Late at night. When I’m supposed to be getting sleep.

I’ve never been locked in a consulate and feared for dead.

So yeah, I guess that makes me pretty lucky.

People say American journalism is under attack, and that’s true. True by the standards of our Western bubble, and honestly, by the standards of how a legitimate democracy should function. But again, I’ve had the pleasure of reading the works of hundreds of American reporters, practically none of whom have been locked in a consulate and, well, you know.

Luck, or maybe culture, isn’t a license to remain blissfully unaware of the inhumane treatment that comes with speaking truth to power, especially in some of the most nefarious corners of the world. Remember James Foley? The dauntless American photojournalist was tragically killed tracking terrorism in the Middle East. And what about Masha Gessen? She fled to New York from Russia, fearing for the safety of her family at the hands of her country’s political machine.

Is the American media fortunate? You bet we are. Are we perfect? Absolutely not. But the vast majority (or at least a large slice) of the world has it much, much worse; isn’t it the least we can do to stand up for the most basic pillar of human rights: freedom of thought?

Journalists aren’t meant to tell us how, what, or why to think. They’re here to tell us what is available to think about. I’d sooner drop an Oxford comma (gasp!) than read an article about infrastructure, but hey, what’s going on with national security? And how do critics feel about that new Lady Gaga movie?

What we pay attention to, and what we choose to dismiss, are the fundamental building blocks of personality and character. Do you ever wonder what the most corrupt and least innovative international players have in common? Consider their abysmally low press freedom indexes. I guarantee that economies and educational institutions suffer because of it.  A free flow of information is the first step in facilitating the formation of an individualistic, productive, and impactful society. Therefore, to deprive an individual of that basic right to know is – unquestionably – a violation of human rights.

I’ll say it again: a violation of human rights.

My fellow Americans, is that who we are? Irresponsible elitists who look the other way when society is under pressure? Or are we the ones who stand and say, these are the facts, no matter how much they hurt?

Our world quite literally depends on it.