UArts students get hands on experience at North Penn

University of the Arts students test their skills at North Penn as the baton is passed to the next generation of conductors. 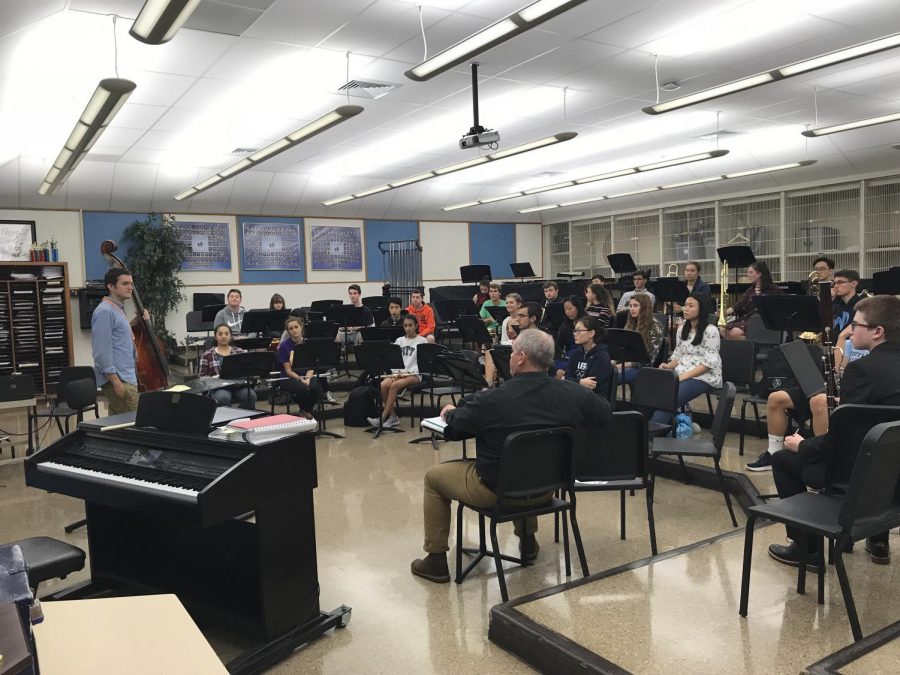 Students from North Penn and University of the Arts come together with a common love for music in Mr. Heller's room.

TOWAMENCIN- For the next couple of weeks, students from the University of the Arts, majoring in the Masters program for Music Education, will get hands on experience with our North Penn music students. Several University of the Arts students are here every Friday for the next few weeks before they split off and attend different high schools to student teach one on one. Professor Matthew Gallagher is also in attendance with his students as they go from classroom learning to classroom teaching.

“Our role here is mostly with the wind ensemble, practicing our conducting, and trying to get used to being in front of the band and feeling the beginning stages of being a band conductor. . .at the University of the Arts, we don’t normally get an opportunity to be in front of a large group like this. We are mainly just around jazz bands and small combos so it’s interesting to be in front of a more classical group and getting a chance to conduct with the baton, which is very different, but also a lot of fun,” explains Mr. Kevin Blanke. Blanke will be staying with Mr. Heller at North Penn to further his student teaching.

The biggest difference is the learning curve after consistently being in a classroom to learn for the past four years, and then applying all of that knowledge to a room full of high schoolers.

“Being in this environment is kind of like a whole new place – it’s new, but that’s what makes it fun. It’s challenging and it keeps you on your toes, and there’s a bit of excitement, not knowing, not necessarily, what is going to go on, but it makes me keep coming every single week,” says Blanke.

Blanke will be with several North Penn Music groups – the wind ensemble, jazz band, and marching band – until his departure in the winter. He will most likely be conducting a piece at the winter concert to end his student teaching before receiving his master’s degree next year.

“What we are really trying to learn from this experience is how to get a reaction out of the group, and how to talk to an ensemble, and try to get them interested in one common goal. . .and to try to end the piece strongly and get them involved in class, and not just staring at you,” explains University of the Arts student Mr. Shawn Clerkin.