Students get some canine companionship 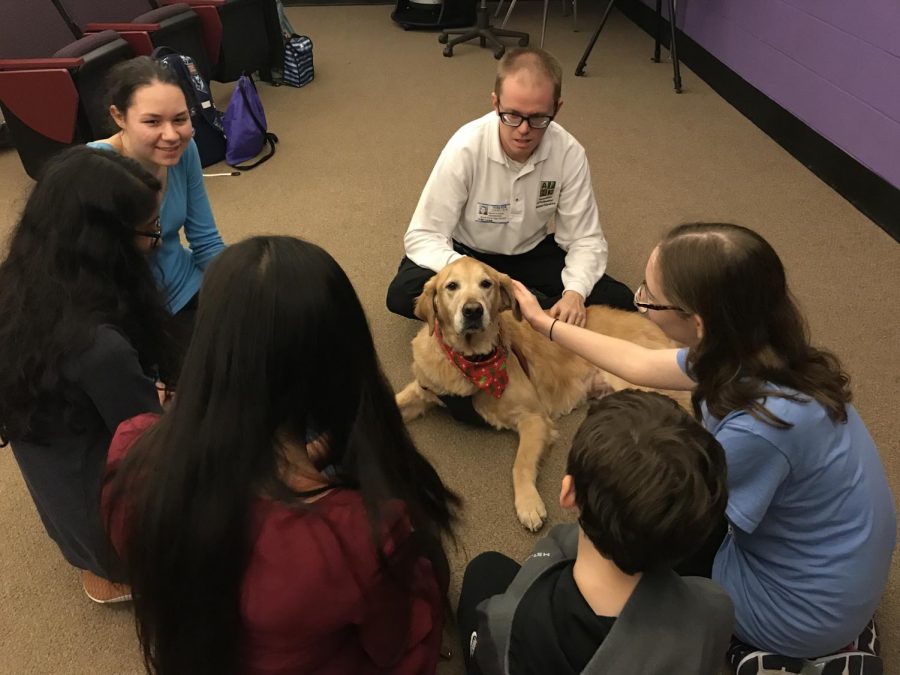 Steven Conway and service dog Faith embraced by members of the ENACT Club after their presentation.

TOWAMENCIN – We all need a little faith in our lives. And who doesn’t love a little canine companionship?

On Tuesday, December 5th, North Penn High School’s Environmental Action Club (ENACT) members and other North Penn students interested in the Society for the Prevention of Cruelty to Animals (SPCA) met Golden Retriever dog, Faith. Faith and her owner Steven Conway, the Montgomery County SPCA humane educator, made a special appearance in North Penn’s Planetarium. Conway and Faith visit many schools from kindergarten to the high school level. Since Faith is a licensed therapy dog, they also make trips to hospitals, nursing homes, and public events. Faith, who once resided in the SPCA shelter, is now a licensed therapy dog, sending a message and spreading awareness.

With his passion for education and love for animals, Conway felt right at home in the SPCA. Ten year-old Faith found her way into the shelter as a lost dog about nine years ago. After the seven day protocol to claim the pup, Conway was able to take her home. They have been best friends ever since.

Members of the ENACT Club view Conway and Faith’s presentation.

Conway and Faith, a dynamic duo, have traveled to many schools educating students on animal surrendering……and teaching them how to properly train their pets.

During their trip to the planetarium, Conway talked about his experience with the shelter and with Faith. Students got see Faith in action while she showed off with her obedience and simple tricks like rolling over, paw, and following every direction Conway gave her, and more. Faith sees around 8,000-9000 different people a year and has to work very hard to contain herself and behave, even with the lingering smell of food in the air.

“ I love dogs and animals in general. I really liked this event because I used to have a dog when I was younger and I had an uncle who worked at the SPCA and I would go on walks with him and the dogs, which made the program even more interesting. I really enjoyed hearing about pet therapy and how much it can help people of all ages. It was crazy to hear about some of the stories [Conway shared],” explained Gabrielle Leon, ENACT club member.

Aside from just therapy dog training, Conway’s most interesting stories he shared at North Penn came from many calls the SPCA has received concerning different types of animals. Whether they had to take in cows, chickens, snakes, etc., the craziest one he was apart of was a call in regard to a 260 lb. panther and whether or not the family could adopt it.

Many other students in the room loved listening about Faith, and most importantly petting her. With a love of the environment, animals fit into that category as many students were gushing over the cuteness of the Golden Retriever. Students with tight schedules who don’t have enough time to take care of any animals found the event particularly valuable.

The ENACT club’s major goal is to teach individuals to respect and cherish their environment. This also includes respecting the animals in it.

“Bringing in the SPCA was a really great idea because our club is all about the environment and nature and  about caring and studying it. The SPCA was a really nice way to kind of add on to what we normally do…it was something different to bring into the mix,” explained Enact Club member Dyani Clark.