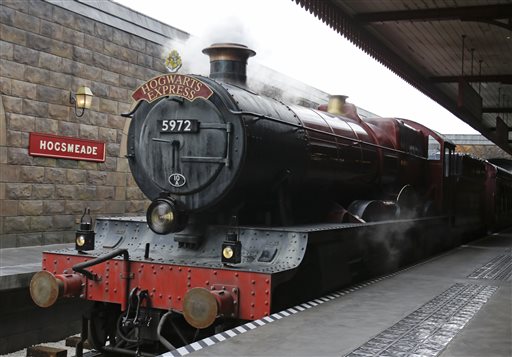 The Hogwarts Express arrives at Hogsmeade station during a preview of Diagon Alley at the Wizarding World of Harry Potter at Universal Orlando, Thursday, June 19, 2014, in Orlando, Fla. (AP Photo/John Raoux)

Don’t drown yourselves with Butterbeer quite yet…

The marvelous adventures of Harry Potter through all 8 movies have been with us since 2001, with over a decade of fun times with family and friends. Once the ball drops on New Year’s at 12 A.M., Harry Potter will be officially off of Freeform (formally known as ABC Family). Flipping through the channels on holidays or even any random night to find that there is yet another Harry Potter Weekend Marathon will be missed. Though most “Potterheads” own all the DVDs and books, the thought of an end to this era saddens us all. After being in the underground works for a little while now, NBC Universal has publicly acquired a license to the rights of all Harry Potter movies starting January 1st 2018. The network Freeform, has failed to continue its deal with the Harry Potter films.

Thankfully the Dementors haven’t sucked all the good things out of this situation because HBO Family has agreed to the rights of broadcasting the Hogwarts gang’s riveting adventures. With an exclusive licensing deal, the network is granted all 8 movies on television and streaming services. With a subscription to the network, you can view the movies with no commercial breaks!

Freeform is ending the year as they contribute one final Harry Potter Marathon from December 28th-31st. But don’t worry, HBO is streaming all 8 movies straight from 9 am on January 1st till the following morning, then premiering one movie each night.

HBO Family has very high expectations to live up to with their new rights to show the tale of our beloved wizards. The era of Freeform is drawing to a close, but who knows the fate of those 8 movies? Are they in the right hands? Will it be possible to stay on the couch for a whole weekend with a solid excuse? Unfortunately, these questions are unanswerable until HBO Family takes over entertaining Harry Potter fans in the new year.