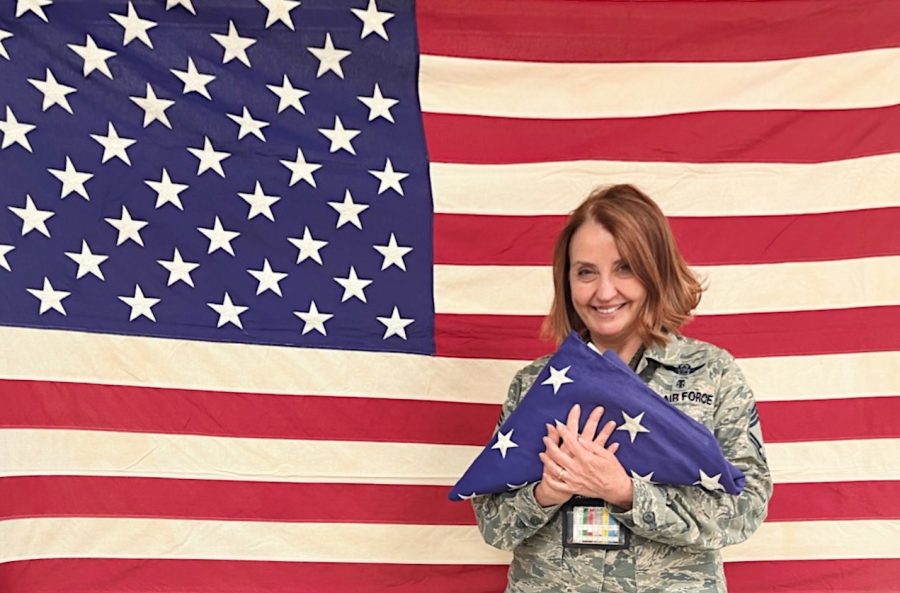 Not many students know the value of being a part of the JROTC program. For those that do, it is one of the most meaningful high school experiences they have with the pioneer for it all: Chief Dee Sullivan.

After fifteen years of running the JROTC program at North Penn High School, Sullivan is retiring with lots of love for the program, her cadets, and all of the good work they have done throughout the years. Alongside Major Jean-André Parmiter, they teach a variety of classes including Science of Flight, Frontiers of Aviation, Aerospace Science, and Global Studies.

Before becoming a teacher at North Penn, Sullivan began her career in the US Air Force. She enlisted in 1982 and from there, traveled around Europe treating military members as an Aerovac tech and also doing humanitarian missions during over twenty-five years of service.

Sullivan began her teaching career at North Penn in 2007 to a program that didn’t even have an American Flag and transformed it into the distinguished program it is today. She teaches the leadership portion of the course while Major Parmiter teaches the science and history portion. Among her favorite topics to teach is flag folding which is the traditional method of folding a flag.

“The support of the community as well as the district to help us get the assets that we need to be able to execute all the different things we do has definitely helped but the biggest thing is the cadets,” Sullivan said. “The kids themselves are the ones that say “hey Chief can we do this?” and it’s cool watching them from the planning stages to the actual day to the after stages, seeing a cadet execute the steps necessary to make it a success.”

The JROTC program does not only include military education but also ample volunteer service that gives the cadets experiences that can give them scholarships and life skills to be successful in the future.

“One of the best things is watching the cadets when they first come in and they’re a little bit apprehensive and they’re not confident and with all the wonderful things we’re able to do in the community they have to step out of their comfort zone and be in charge,” Sullivan said. “That gives them self confidence and they know that they can do anything they put their mind to.”

Sullivan admitted that her retirement will be very difficult for her. She is moving to Delaware with her husband and she still plans to travel as much as she can as her life in the air force has given her a love for travel.

“I’m going to have such a hard time leaving, I love [my cadets] so much,” She said emotionally, still planning on communicating with her cadets whenever they reach out.

“One of the biggest honors for an enlisted person is to be able to give what they call a first salute. Several of my cadets throughout the years have asked me to give them [their first salute] when they become officers because I’m enlisted so even though I was in for twenty-five years they outrank me the minute they get commissioned. I’ve been blessed to go to their commissioning ceremony to give them their first salute,” Sullivan said with gratitude. At the time of writing, she was asked to give a first salute to one of her cadets in the Air Force Academy and is visiting Colorado to do so in mid-May.

More than anything is that Sullivan will miss her cadets and all of the memories made along the way with them.

“They’re nuts, they’re crazy, they’re fun. I never know what to expect from them and I love all of the ideas they come up with. Sometimes they succeed and sometimes they don’t but they still grow from the experience,” She said, wishing her graduating cadets luck in the future as well as her current ones continuing in the program. “The biggest thing is don’t be afraid to fail, don’t be afraid to try something new. You’re only going to grow from it.”