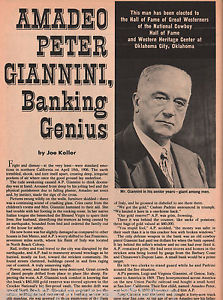 Amadeo Giannini is probably not a name most people recognize from American history.  However, I bet most people have heard of what he was responsible for creating.

Giannini was born in 1870 in San Jose, California to a pair of Italian immigrants.  As a young man, Giannini grew angry that the banks in his area catered only to the largely White, wealthy class and ignored people like him who lived in the poor immigrant communities.  Unfortunately, banks near him considered poor immigrants as having little economic value and therefore saw them as not worth their time.  Giannini knew better.  As an Italian himself, Giannini knew of two important cultural norms within the Italian community that he felt the banks were overlooking.  The bankers did not see them because they were blinded by their stereotypes of new immigrants.

The first norm was the habit of saving.  Italians in the “old country” generally had nothing to speak of in terms of wealth.  They also had little fertile soil in which to grow an abundance of food.  Over many centuries, Italians survived those difficult conditions by working hard and saving whenever they could.  The second cultural norm was the emphasis on paying back debts.  Whether it was a favor or actual money, Italians tended to place a high value on paying back the person(s) who helped them.  Of course, these culturally embedded traits came with Italian immigrants when they made their way to America.

Although angry at the discrimination many immigrants faced, Giannini saw an opportunity and channeled his anger into action.  In 1904, he took a risk and opened a small bank that specifically targeted Italian immigrants as clients.  He called it the Bank of Italy.  He catered to these immigrants because he realized that hard-working savers who always paid back their debts were the perfect clientele for a bank.

The bank grew and by merging with other banks over time, it eventually spread across America.  The bank is no longer called The Bank of Italy.  Today, we know the bank Giannini founded as The Bank of America.

Giannini is a great example of the saying “When one door closes, another opens.”

All of us face challenges of various kinds.  Some more than others.  People may lack money.  For others it may be struggling to pass a difficult class.  It could be a difficult ending to a relationship.  In Giannini’s case, it was discrimination.

Although we cannot control many of our bad experiences, we do have a lot of control in how we respond.  Giannini is a great example of this.  So are some of the other heroes we learn about in history.  People like Martin Luther King, Rosa Parks, Gandhi, Emmeline Pankhurst, and many others.  They certainly were not blind to the difficulties around them.  What they did see was an opportunity to promote social change in their own way.  Each channeled their anger and frustration into productive action.  In essence, they found another “door” which led to positive economic and social changes in their communities, their country, and in some cases, the entire world.

Undoubtedly, 2017 will bring a mixture of good times and bad to all our lives. Every year does to a certain degree.  Although challenging events can overwhelm us at times and lead some doors to close, Amadeo Giannini and many other pioneers for social change teach us that bad times can also introduce us to new doors that, if opened, may lead to new and exciting opportunities for us and others as well.

I wish all of North Penn a happy, healthy holiday break!  May your 2017 be filled with many doors of opportunity!